Not another Bandit Streetfighter...

Joined Jul 28, 2017
·
344 Posts
Theyre banned from mine too Yan...just temporary...there is a storage bit at the back but that's somehow almost full!
Might have been better to move family to the new bungalow/garage and turn the house over to me.

Joined Jul 28, 2017
·
344 Posts
Thats just about it for non bike related interlopers into the garage. The bandit frame, in primer to prevent rust, now sits on the bench whilst i wait for the delivery of a bench lift...cant wait for that.

Joined Jul 28, 2017
·
344 Posts
So, parts of the bike that i have previously worked on and beem stoeed at my old man's are now back in my possession. Looking at the forks that i polished i now dislike them so took a scothbrite to them to aim for a dull brushed look. Not sure how far to go in terms of trying to remove gouges and scratches, but think i will have a go.
At this point i am going to keep the yokes polished...hopefully emphasising the difference between the finishes of the forks and yokes.
I was initially concerned that the ZXR750J1 USD were going to be substantially shorter than the original B12 ones...not that i had any as i only bought the frame...and i know it's the ugly Mk2 but hope to change that. I have been told that the B12 forks are 775mm in length and the Kwak's are 765mm so nothing to worry about. Seeing as Yan pressed the stem in for me and made up a bush for the top yoke, i was really keen to carry on with them.
Next job? Chuck the forks and swinger, with Gen1 'busa shock in and see if i can roll it about and crucially try it out for size to start with the subframe bulld.
Tried MIG for the first time ever today...fuck does it look easy on YouTube! Brother in law is gonna help me out there so i can eventually weld in anger.

Joined Jul 28, 2017
·
344 Posts
Getting a scissor lift this week whilst waiting for the bench lift to come. Knowing this i popped the front end in, minus the wheel, to have a little look at it. Knowing the USD's are only 10mm shorter than the original B12 ones i am happy to carry on with them. I wonder if you guys know a easy way to measure trail, rake, etc so i can compare it with the original forks? Out of curiosity more than anything.
Also noticed on the mirror polished yoke what looks like water stain marks...didn't take a photo...but they don't easily wipe away...not corrosion is it?


Sent from my SM-G780F using Tapatalk

Joined Jul 28, 2017
·
344 Posts
Think that'd be a good idea...knowing how far from original it is will guide what i do with the rear.
Threw the swingarm in with the 'busa shock...tight but looking ok, will know more when i put the wheels in which i plan to do this week and start figuring out whether the basic peg mounts i made will work or not as they are set slightly rearward.
The spacer at the front of the linkage is for some reason a couple of mm too long for me to attach it to the frame...might be the wrong one so going to look for another used one or i shall chop this one up.

Joined Jul 28, 2017
·
344 Posts
Had my little scissor lift delivered this afternoon...awesome thing, don't know why i never had one before.
So with its help the bike has its feet on again. Measuring can now take place to see what subframe i am going to build.

Joined Jul 28, 2017
·
344 Posts
So easy to use...22mm socket on the end of a drill makes going up/down super easy. Its also on little wheels making moving it and the bike around less of a faff.
I used to have a hydraulic larger lift but this is far more stable. 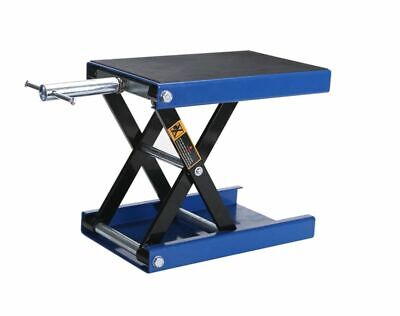 
Sent from my SM-G780F using Tapatalk

Joined 7 mo ago
·
70 Posts
They are great to use, I have a slightly smaller one, the main down side to them, is you can't use them with the exhaust on.
R

Joined Jul 28, 2017
·
344 Posts
Today i have slapped on the footpeg mounts i made from 10mm ally what seems eons ago. They still fit and the pegs mount upon them ok...there might be the slightest of play in the pegs, but i need to look into that a little more.

The lower yoke bump stops just catch the frame but i think slightly enlarging the frame area with a welded on extension will provide peace of mind. You can also see on the polished lower yokes what look like what marks or stains but they don't rub off...any ideas what they are? Probably going to have to polish them again i guess.

Now the Gen1 'Busa shock fits but there is almost bugger all room where the shock goes through the swingarm. I havent tightened everything up yet so there may be more or less room then. If i get longer dogbones would that have the effect of moving the orientation of the shock through the swingarm?

Joined 7 mo ago
·
70 Posts
Yes, if you put longer dog bones on it will help. The swing arm look a quiet a angle so will help with that as well.
Putting the gen1 bussa shock on b12 is a common upgrade. It get two lengths of flat bar drill a load of holes in them, and use them to get your ride height and shock spacing right but making/buying the size you want, saves a lot of pissing
Also just for information the bussa footpeg hangers fit the bandit.
It's looking good
R

Joined Jul 28, 2017
·
344 Posts
Thanks for that...i can imagine longer dogbones will alter the angle which the shock goes through the swingarm. Good idea about some flat bar as a guide.

Scat6 said:
Yes, if you put longer dog bones on it will help. The swing arm look a quiet a angle so will help with that as well.
Putting the gen1 bussa shock on b12 is a common upgrade. It get two lengths of flat bar drill a load of holes in them, and use them to get your ride height and shock spacing right but making/buying the size you want, saves a lot of pissing
Also just for information the bussa footpeg hangers fit the bandit.
It's looking good
Click to expand...

Ordered some flat bar which i shall drill some holes...10mm from memory...and see what the clearance is like in each hole. Question...is there a rule of thumb regarding a particular increase in the dogbone length will alter the rear ride height by a particular amount? the hole centres on what i presume are standard dogbones is 166mm. am i right in believing that longer dogbones reduce the ride height and shorter, than standard, will increase it? thanks.

Joined 7 mo ago
·
70 Posts
The short answer is, yes.
Longer the dog bones lower the ride height.
It's always a juggling point, to get the ride height you want, but the chain don't cut thought your swingarm pivot point

600er Bandit mit 1052 ccm GSXR Motor
Joined 9 mo ago
·
227 Posts
Build yourself an adjustable version. Either for testing or forever. So similar: