Half the gauges didn't work and the license plate was missing but ended up registering fine. Needed a TON of work but I was able to ride it home last night for my first ride on a street bike! As a part time mechanic I couldn't wait to dive into the world of bikes. I plan on a full mechanical tune up then swapping plastics.

(These are my posts from KawiForums... but that forum seems dead so I'm converting)


Picked it up on a tuesday night at 8pm and paid 360$ for it. Rode it home (first time on a bike bigger than a 80cc lol) and instantly fell in love. PO said the head gasket was good but after a few days of riding I decided to do a compression test and got a whopping 5psi in cylinder 4. Off came the head right away. After a bit of cleaning and inspection I decided to order a new used head from ebay. Found one for 75$ that supposedly had 19k on it. Head came in the mail last night and looks to be pretty damn straight with no stuck valves.


Almost all of it has arrived so almost time for reassembly. Yesterday I re-jetted the carb for the first time (fingers crossed its good enough). Today ill be block sanding the new head... Going to take the head and as many parts I can into work to use the parts washer tomorrow.

Excited to get started on this thing! Think I'm going for a one-off streetfighter Stormtrooper look. Not going to start with any aesthetics until I get the bike clean and running great. Only time I ever got to ride it was was on three cylinders lol.

Night I brought it home:

Ugly as fuck so off came the gauges. Going to go with the Vapor gauge system. Then grabbed these lights that will end up somewhere around here...

Some point the head came off. Pistons dont look terrible so I'm not going to mess with them

After this all the mechanical parts came in and I build the thing back up. Was having trouble with a high idle- ended up being the idle mixture screw (don't rejet your carb drunk). Then stored the bike at a friends house for a weekend while my parents were in town. If they knew I had a bike or am working toward a license I'd be dead... for good reason of course :fu:. Picked the bike up once parents left and had an electrical problem... turned out the leads to one of the coils were loose so I was running on two cylinders. Got all that bullshit out of the way so it's time to start the fun stuff.

Here's the most recent pic of the bike just before I left for school this morning:

Today I learned not to ride with your wallet in your back pocket and lost the damn thing... So that was pretty frustrating.
Tonight I started work on the headlight bracket... I'll finish that up in the morning before school and throw up pictures tomorrow.

F'dup said:
Lol, these bikes are great because no matter what you do, it will never be as ugly as stock
Click to expand...

Got the first part of the headlight bracket done this morning. Good enough to wire in a running light...

I'll box in the sides next. Still deciding how fancy im going to get with it.
My Vapor gauges got here over the weekend and I was planning on installing tonight but I may wait till I put straight bars on the bitch and just use the factory mount. I'll take a closer look after work.
T

Spent the day pretty mad so I blew up steam by ordering a water pump. Hopefully that solves my problem. Otherwise this piece of shits going back up on CL...

Did a little bit more on the headlight bracket. Taking it in to work tomorrow to hopefully TIG it together. Kept it nice and simple.
T

Started replacing the Trans and shifter shaft seals but had two of the screws strip out... So I'll pick up a ez out set tonight and see if I can destroy the screws... otherwise my dremels going to get a workout:

Also, my fork seals came in the mail yesterday so I decided to get into that. Got the forks off this morning before I got sidetracked... Decided to paint the front wheel while its off. Two of the bolts holding the rotors on sheared off -_-. Prolly just going to DGAF about those. Took the wheel in to work today to powerwash before paint.

(BTW, fork oil is BLACK! This bike is almost certainly a virgin bike. Dont think much was ever worked on...)

Sidenote: my new keychain came in the mail this morning!

Heading out to finish the forks and tranny... Will post pics once the front ends back together with fresh painted wheel.
T

Got the tranny cover off and found out why the seal blew... 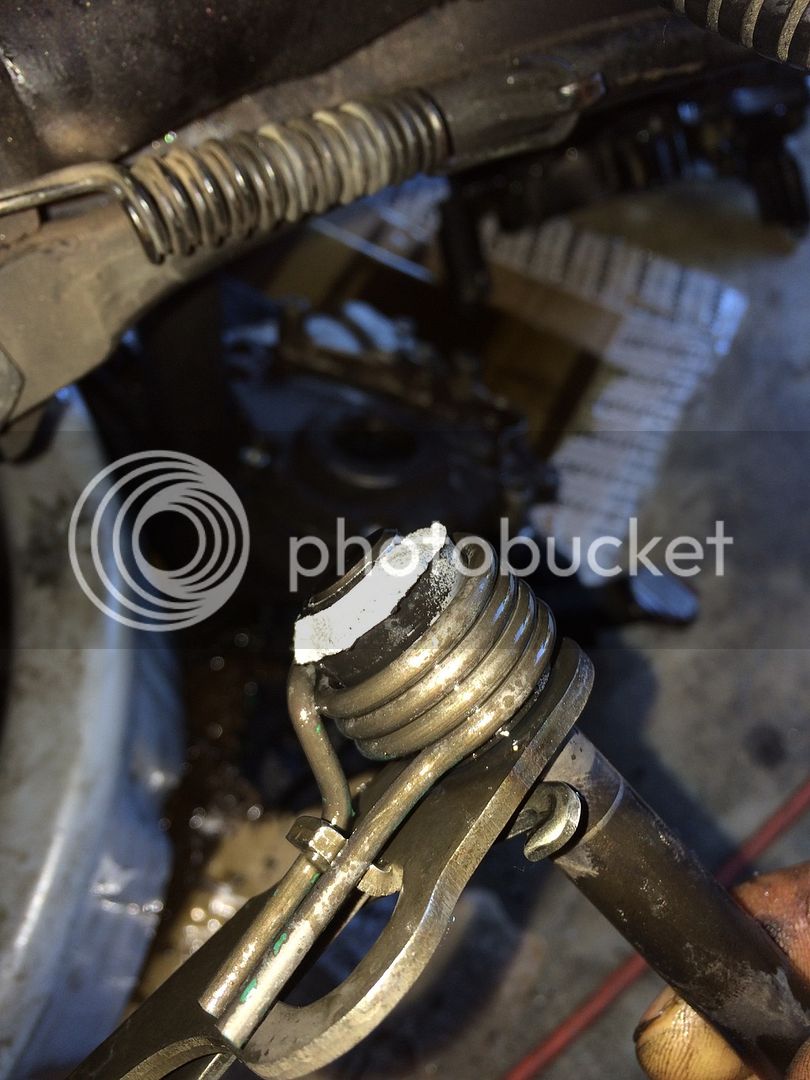 Am I right thinking that the backside of the hole is filled with oil? In my thinking this wouldn't be causing water to mix in the oil...
Anyone know of any adhesive strong enough to hold this POS together?

Joined Jul 4, 2010
·
255 Posts
There is a lot of stress on that piece(apparently enough to break the casting). I don't think JB or similar will work at all especially in the long term. Maybe somebody else can weigh in on this. I would replace the engine case or have it welded.

Case covers, case parts where there isn't oil kicking around... Sure that stuff may work.

Put you have actual moving pieces where that part broke off. If it were me I'd not do epoxy...
T

I've read online that some epoxies can get to be just as strong as aluminum so was crossing my fingers... I have a spool gun for my MIG but I've never used it and don't really want to break it in on the internals of my motor :/

Just super let down this happened. Just redid the top end too

It really has no problems running and driving as is except that it blows shaft seals... Honestly I'm probably going to give epoxy a try. Maybe fix it a couple times then sell the bike. Maybe I'll watch for a cheap entire motor to just swap in after a bit.
T

About a week ago I was working on the bike at a buddy's house and took off the front sprocket cover/shifter brace. We figured it'd be fine to drive home without it. The next morning I noticed the shifter felt looser... Pretty sure that's when it gave out
T

Then got into the epoxy. Drying currently... Need to pick up a couple bolts tomorrow to replace the stripped ones.

Got the new water pump on. Bikes ready to run once I get the forks back together and bolts in!

Might be good to look down there every once and a while to make sure there isn't any engine oil making out from that seal on the shifter because the epoxy failed. If that seal wasn't intended to hold back fluid chances are it won't.

And being surprised mid corner by oil on the rear tire isn't nice experience...
T

Joined Apr 12, 2016
·
32 Posts
Well The bikes back together. Shock feels great! went to take it on a lap around the neighborhood and made it a good 2 mins before the engine withered out.

The last time I rode it before breakdown it felt like it was losing power right as I pulled onto my street. Then I checked the gas tank and thought I was out of gas. I now have a full tank :/
Just hoping I didnt bend a rod when I rode it last with water in the oil.

Fucking mosquitoes are feasting on my ass so im done for today. Passing out mad once again
T

Was brain storming last night as to why the bike felt like it ran out of gas. Then thought about how I plugged my gas tank vent into my carburetor thinking thats where it should go.... Then realized that would create a plug to my vacuum controlled petcock and was keeping me from getting fuel. Unplugged it and rode straight to school!

Now just to figure out which vent on my tank goes where.

You're right. Couple shots before the sun went down. Can see my other hobby in the background